In my last post, I framed my upcoming vacation as a mix of adventure & renewal. Following this theme, the night before being back in the office I wrote this update.

When I had set off on an extended time away from the office about a month ago, one of my key questions was what being ‘refreshed’ actually feelslike, aside from clichéd metaphors like ‘recharged batteries’.Tonight, I think I have a sense. First – maybe most importantly of all – it’s that I’m genuinely excited about returning to work. It’s a wonderful feeling: I can’t wait to hear how various members of the team have been empowered in my absence, the leadership different people have taken, and the progress the team has made while I’ve been away. I’m looking forward to guiding the direction of some key projects, and kickstarting some new ones. Most of all though, I’m excited to listen to the team and other key people I interact with day to day – to learn from them about what we can collectively learn from this experience. In my travels, often I would hear of people dreading their return to work following time away, and so to have enjoyed my vacation as much as I did, while also genuinely looking forward to returning – this I’m very thankful for.

Second, I think being refreshed has something to do with my ability to focus. I’d call this my ‘sharpness’. I feel like I’m both speaking & thinking more clearly these days. I’m ready for new challenges, new problems to solve, and to support others in theirs. In a sense, while my mind has been working at the day to day challenges presented by this adventure from the past 30 days, now I feel like I might be ready to tackle bigger picture issues again.

Adventure: In Search of a Place to Sleep

So what was this adventure? Well, let me first say that it didn’t all go according to plan.

Various changes meant that I only biked for half as long as I expected to. It contributed to the fact that on fully six mornings during the trip, I didn’t know where I was to sleep that night. But I certainly got around quite a bit: I moved from the shores of Lake Huron, to the wineries of Prince Edward County, to the backpacking trails of Algonquin Park and the urban beaches of Vancouver, BC. Perhaps not surprisingly, I re-learned what a beautiful & breathtaking province & country we live in. 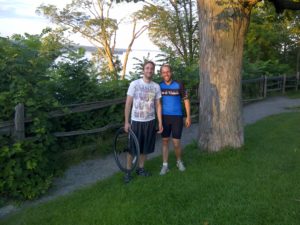 During the trip I stayed with 4 different homes or cottages of either Sustainable Waterloo alumni or our current team members, couch surfed, stayed at a friend’s place, or found a place more by happenstance. While of course relying on others to provide accommodation considerably reduced my expenses during the trip, more importantly for me this was about connecting with people I knew, as well as those I didn’t. Maybe not surprisingly, most of my highlights from trip were as a direct result of the people I stayed with. I re-learned how much deeply I value a sense of community – both as a theme during the trip, and as something I missed about Waterloo towards the end of it.

I’ll end with one particular challenge from the trip that connected me with Sustainable Waterloo: starting a fire my first night in the wilderness of Algonquin Park, where my brothers and I had backpacked 13km to get to our campsite on beautiful Maggie Lake. While we’d all been to some level of scouts in our younger days, years later our fire starting skills were now certainly lacking. Equipped with a small lighter, damp wood, and limited newspaper supplies, we each tried to get it started on our own, to no avail. With each failed attempt, I continued to internalize how critical this fire was to each of our immediate well-being – not only would it be the entertainment for the evening, it would boil non-potable water from the lake, and maybe most importantly, it would keep us warm on what felt like an unusually cold August evening. And as we continued to fail getting the fire going, increasingly the most important aspect – for me at least – was to show us that we could do this together. And so that’s exactly what we did. The three of us co-created the plan to get it going. With a plan that I’ve since learned is similar to the ‘log cabin’ approach, my older brother found the driest wood around. When one of us would worry about it never starting, another would instill confidence that we would. I think my greatest contribution was in my own determination to see the fire start, and secondly in my aptitude for blowing air in the limited flames we had in the early going! As we began running out of paper to help start the fire, my younger brother even sacrificed the last few pages of his beloved crosswords. And with that, eventually we had 2, then 3, then 4 small pieces of wood lit – eventually leading into the whole fire; at which point of course we celebrated like our favourite hockey team had won the Stanley Cup.

While I’m proud of our collective ability, I couldn’t help but internally draw the comparison to the challenge of starting Sustainable Waterloo over the past few years. Certainly we’ve got a fire going here, the plan to get to this point was absolutely co-created, and it’s taken all of our team’s collective abilities to get successive pieces of wood lit.

Tonight, I have a fire burning inside of me to amplify that of the Sustainable Waterloo team.

Having now been back at the office for the past 2 weeks, I can say it’s been a lot of fun. I have done a ton of listening, and I’ve been so amazed by the degree to which so many of our volunteers & staff were empowered in my absence. While there is no shortage of work to catch-up on, I’m proud to say that it’s good to be back. My hope is to continue to be diligent in managing my work/life balance – as well as supporting that of our team members – so that this sense of ‘renewal’ sticks around. At the end of the day, this work is too much fun to allow myself to become worn down by too much of it.

One thought on “Keeping the Fire Going”

Archives
We use cookies on our website to give you the most relevant experience by remembering your preferences and repeat visits. By clicking “Accept All”, you consent to the use of ALL the cookies. However, you may visit "Cookie Settings" to provide a controlled consent.
Cookie SettingsAccept All
Manage consent

This website uses cookies to improve your experience while you navigate through the website. Out of these, the cookies that are categorized as necessary are stored on your browser as they are essential for the working of basic functionalities of the website. We also use third-party cookies that help us analyze and understand how you use this website. These cookies will be stored in your browser only with your consent. You also have the option to opt-out of these cookies. But opting out of some of these cookies may affect your browsing experience.
Necessary Always Enabled
Necessary cookies are absolutely essential for the website to function properly. These cookies ensure basic functionalities and security features of the website, anonymously.
Functional
Functional cookies help to perform certain functionalities like sharing the content of the website on social media platforms, collect feedbacks, and other third-party features.
Performance
Performance cookies are used to understand and analyze the key performance indexes of the website which helps in delivering a better user experience for the visitors.
Analytics
Analytical cookies are used to understand how visitors interact with the website. These cookies help provide information on metrics the number of visitors, bounce rate, traffic source, etc.
Advertisement
Advertisement cookies are used to provide visitors with relevant ads and marketing campaigns. These cookies track visitors across websites and collect information to provide customized ads.
Others
Other uncategorized cookies are those that are being analyzed and have not been classified into a category as yet.
SAVE & ACCEPT